« Life on board | Arrival in Qaanaaq »

Getting swamped in the search for salt marshes

Share this page
Posted by WWF Arctic in From the field, General on 3 August, 2012
Tags: Last Ice Area 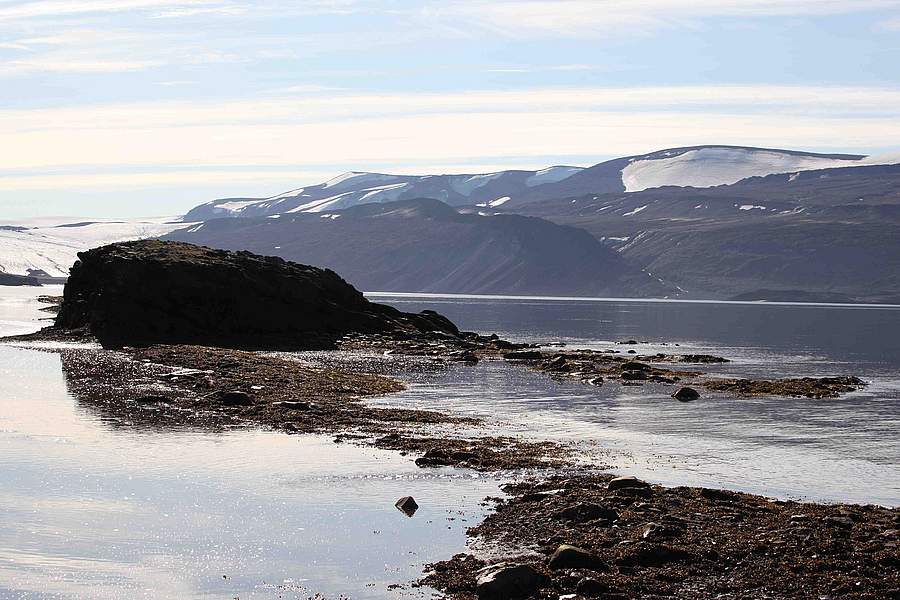 I awoke this morning keen to start work. For a few days I’ve felt a bit pessimistic about the research.  This was despite a good salt marsh in Upernavik, and my surprise find tucked away in a cleft at the ‘Twin Islands’, a few hundred kilometers further north than any salt marsh researched in Greenland.   But the shores in the past few days hadn’t even got the plants that showed me salt marshes could grow here. However, last night we had explored Mount Dundas, the original ‘Thule’ where the community was expelled for an airbase, and  on the beach by the houses were not just plants but actual salt marsh!  By a stream and a track, which confuses the analysis, so, not the right sort of marsh – but a salt marsh nonetheless – the plants could manage with 3 months growth for each 9 months of deep freeze!  So today there was a good chance of a real find.

First we looked on the islands nearby. Mainly tidal islands, linked to land at low water. Lots of eider duck nests – now abandoned, like the houses, the chicks grown big enough to leave. Lots of healthy ‘splash’ marsh, but no protected rock clefts for a ‘proper’ one. Next to the islets further down the fjord; but Saunders Island, with its beautiful stripy cliffs, did not give enough shelter from storms.

Finally we reached the most promising site, Drowned Bay, on our route north west. This was cut into a large flat area of starkly beautiful coast, probably formed under a stable sea level a while back, just a few metres higher than the current one.  Fairly enclosed, giving protection from waves; known to be shallow, and with a stream at one end, bringing sediment which help marshes grow, everything pointed to this being a worthwhile place to look.

First the Arctic Tern had to anchor. There were more reefs near the surface than we had heard about, but we found a spot in the mouth of the bay. The onshore wind and half-metre waves started to splash us as we headed for the northern point of the bay in the dingy.  Rounding this I could see the cliff and beach offered no quarter to developing marshes, so we turned to head for the south-eastern shores, 2 kilometres away.

As with the yacht, the dingy had to slow to a crawl as boulders became numerous. The tide had dropped and the word ‘shallow’ was taking on a new meaning.  The water changed from green to a thick yellow and even lying in the bows, peering ahead to try and spot rocks in time, I could see nothing at all through it. It was now less than half a meter deep so Valentine pulled up the outboard engine and we rowed.  As we got closer to the coast, I could rule out more areas, but not the most distant – and most promising – one.

The wind and waves made controlling the dingy – clearly not designed with rowing in mind –  more difficult, and as there was ever less water depth we clambered out to pull it. But even walking was now difficult. 10 cm of water, then 10 of soft mud, and it seemed firm. But pushing down to pull on the boat gave the mud time to grip. Lifting your feet was more difficult than the actual pulling – at least if you wanted to keep your boots on. And each pull only shifted the boat a few cm. Between the four of With the erratic boat movements Mette almost fell into the near-freezing sea; filling boots with water seemed like getting off lightly. But this gave her a brainwave, so by counting out loud and pulling together, we now advanced half a meter a time. And behind us stretched our footprints and boat track in the now exposed, sticky mud.

But we felt more hopeful – we were making progress. Ahead we saw a change in the ripples on the water – maybe where the river flowed across the bay towards the sea – so maybe a slightly deeper channel where the boat might float, or we could row. And if we headed back towards to yacht, maybe I could jump out onto the small beach and go by foot to check the one possible place for a marsh. But once afloat, advance though this was, our progress remained slow. Rowing – and punting with the oars against the bottom – we moved forward most of the time, although even this was often only vaguely the way we needed, straight into the wind and the waves. And the visibility for rocks, while variable, was often low.

Finally we could use the outboard motor. Gingerly we edged towards the yacht. Further thoughts of looking for salt marshes here was abandoned – tired, wet and muddy, even if any marsh was there we would not be up to extra hours’ work it would mean, glad as we were to have avoided sitting in the dingy waiting for high tide to refloat us and let us escape.  But in any case the yacht, too, needed to move – with the extra-low tide today, and the unexpected rocks, it needed to move as soon as possible to avoid grounding itself.
What fun it is researching in poorly mapped and described areas!

« Life on board | Arrival in Qaanaaq »