Share this page
Posted by mfrost in From the field, General on 29 July, 2012
Tags: greenland, indigenous people, Last Ice Area 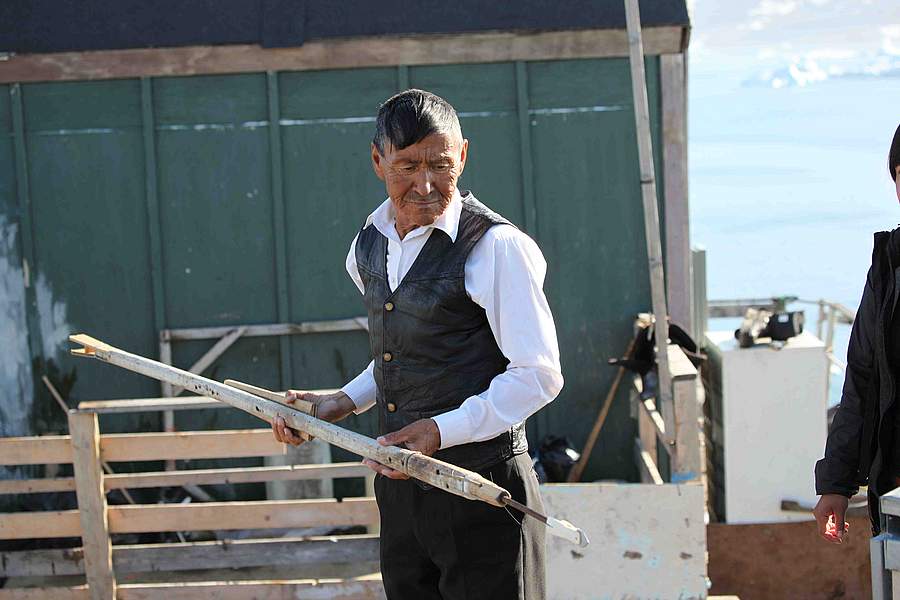 Last night we arrived in a small bay where we found an anchorage protected from both wind and ice. But as there was a risk of the exit being blocked by huge icebergs, the captain decided to introduce the first anchor watches. This gave each of us an hour to sit on the deck of the boat and look at the ice and our anchor while thinking about the past days. We are all settling into a routine here onboard the Arctic Tern and the small quarters are starting to feel a bit like home.

This morning we all slept in after yesterday’s long sailing in bad weather with waves making the ship roll from one side to another. We are all tired – some from the 18 hours of sailing and watches out in the wind, others from the first encounter with sea sickness.

Getting up this morning we saw the sun beating from a clear sky. We went on shore for a short hike, looking for new salt marshes and climbing a little hill, which gave us a good view of the bay and the Arctic Tern. And Tim jumped in the water to become the first polar swimmer of this leg. I plan to join the club, but preferably from the beach in Siorapaluk – the northernmost settlement of Greenland.

We all decided to visit the community of Kullorsuaq this afternoon, Sascha and I to speak to the population there about their experience with climate change and the rest of the crew to have a walk around town. Kullorsuaq is a growing community, which had only 9 houses when our first contact in town, Mathias, was a young man. Mathias told us how the community today has approx. 500 inhabitants.

Mathias told us that he goes hunting for narwhal and beluga in Melville Bay. He travels there by boat, but uses his home made kayak and harpoon to hunt the whales the traditional way. He took us to his house on the top of the hill to show us how he could make his own kayak in only 24 hours and we explained to us that he makes arrows for the harpoons of both bones and recycled iron and aluminum, which he also sells to other hunters. We got an arrow that Mathias had carved from reindeer antlers and will give this to the crew of the Arctic Tern for safe sailings for the remainder of the Sailing to Siku voyage.

Mathias explained how hunting is decreasing in Kullorsuaq. In earlier days he was able to hunt for more narwhal and belugas, but since then the Greenland Government has introduced qoutas based on biological advice, reducing harvest of a number of mammals to sustainable levels. Instead he explained that more and more villagers were fishing for Greenland Halibut like we saw in Tasiusaq further south.

We asked for his advice on polar bears. This morning when we went on shore we brought a rifle to scare polar bears off, but Mathias explained that it was primarily in the winter that they saw polar bears close to the community. He said that most likely a polar bear would walk away rather than attack us. But knowing that we are entering polar bear habitat now we would rather be safe than sorry, bringing along a rifle when on shore.