Polar Bears and the Numbers Game The International Union for the Conservation of Nature (IUCN), a global authority on wildlife conservation, has released a new estimate of the number of polar bears worldwide. Instead of saying there are 20,000 – 25,000 polar bears, it now says there are approximately 26,000 polar bears, but that this estimate has a possible range of 22,000 – 31,000 bears.  Does this mean there are more polar bears now? Confusingly, the answer is no, probably not, just that there is more precise information to estimate the number of bears globally.

The wide range in the numbers above illustrates the difficulty with getting accurate population estimates of polar bears. They live in the Arctic, a place with relatively few people and prone to extreme conditions. They are mostly solitary, which means they live far apart from one another. Finally, counting individual bears is made even more challenging by the fact that they are almost totally white in colour and they live on a white background of snow and ice. Some bears do actually live in places that are closer to people and airports, which make them more accessible and easier to study. Then there are the remote subpopulations whose numbers have never been estimated, and likely never will, such as the “Arctic Basin”, high up in the northern Arctic. How many bears are there? It’s an educated guess at best.

For the past 10 years, the IUCN pegged the global population of polar bears at 20,000-25,000, split into 19 subpopulations. Subpopulations are smaller groupings that together, make up the total wild polar bear population. They were designated based on what biologists know about the movements and genetics of the animals, but also on how groups of polar bears might be managed based on governmental jurisdictions.

Recent improved approaches for surveying some polar bear subpopulations mean scientists can be more precise in their estimates of polar bear numbers. Adding the newly revised estimates together changed the total population number, but as the IUCN cautions, “The mixed quality and even lack of available information on each subpopulation means caution is warranted when establishing and reporting a single estimate of the number of polar bears across the circumpolar Arctic”.  The new number may well be changed again in the future, once more of the subpopulations are surveyed.

If you look at the latest IUCN map, it does show some good news about overall trends for some subpopulations that were previously shown as declining but are now shown as stable: 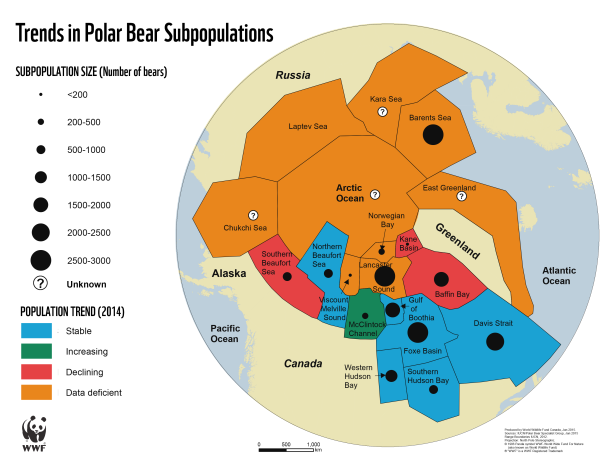 That stability is largely a result of good management – governments working together with scientists and local Inuit to work out sustainable hunting levels. But there are still several subpopulations considered data deficient because they lack accurate information on polar bear numbers. These surveys must be a priority for local governments to carry out so that responsible management of polar bears is ensured.

What does the future look like for polar bears?

The good news about stable populations should not mask the long-term challenges faced by polar bears. The biggest problem they face is a decline in sea ice that they need for moving around, finding a mate and hunting (mostly seals). Until or unless the summer sea ice stops shrinking, which it’s currently doing at a rate of about 14% per decade, concern about the bears’ future will persist, particularly at the southern end of their range.  The same IUCN assessment that changed the way we look at the total number of polar bears finds a significant probability that the polar bear population will decline by more than 30% over the next three (polar bear) generations – about 35 years from now.