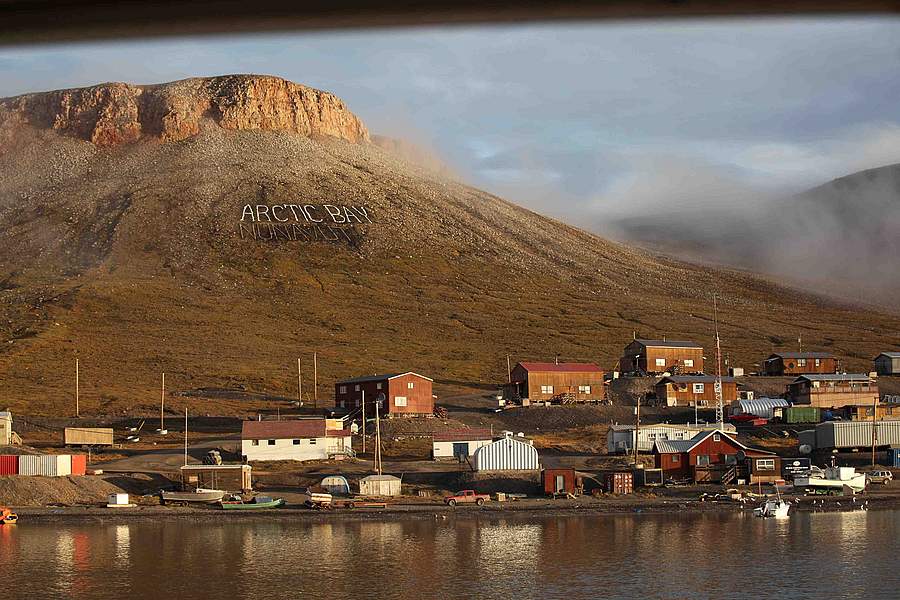 It took 24 hours to sail from Devon Island to Arctic Bay on northern Baffin Island. We crossed Lancaster Sound and entered Admiralty Inlet under good wind and sea conditions. Admiralty Inlet opens southeast off Lancaster Sound, separating the Borden and Brodeur Peninsulas. We sailed partway down the inlet before turning into Adams Sound and then into the perfect sheltered harbor of Arctic Bay.

Icebergs appeared and disappeared as we sailed but the star attraction of the crossing was an ice island – a large flat shelf of ice several kilometers square. We found out later from the ice observer on the Coast Guard ship Terry Fox that it was a fragment of the huge ice island that calved off the Peterman Glacier of northwestern Greenland in 2010.

Arctic Bay was our first community since leaving Grise Fiord a week ago. It was time to resupply with fuel, water and fresh meat, fish, fruit and vegetables. We also took this opportunity to meet people in the community to learn about the latest news.

We stopped by the Hamlet office and found that Clare Kines, the Economic Development Officer was at his office at the Heritage Centre. So off we trekked to find Claire and learn about Arctic Bay’s economy. Arctic Bay is a medium sized community, with about 800 people. It is a community in transition, since the Nanisivik mine shut down several years ago. Arctic Bay and Nanisivik were connected by Nunavut’s only road and by employment, recreational activities and family. Some of the skilled workers are still without local employment. The future? People look toward the proposed Mary River iron ore mine and potential opportunities that will arise.

Next, it was the offices of the Ikajutit Hunter and Trapper Organization (HTO), where we met Jack Willie the HTO office manager. Here we heard details of the successful bowhead whale hunt. Arctic Bay hunters brought in their bowhead in record time: 35 minutes from harpooning to towing the whale into shore. We had hoped to meet the hunt captain, Tommy Tatuapik but he was out of town. It was also narwhal hunting season. One of the hunters dropped by with two narwhal tusks for the HTO manager to measure and register. HTOs manage the community narwhal quota by allocating tags to the hunters. The narwhal hunt, like all quota limited hunts in Nunavut, is regulated by the Nunavut Wildlife Management Board and the responsible federal or territorial department.

Other encounters in the town were more informal. Each time our zodiac came ashore we were greeted by a band of children, who were curious about our boat and asked to be taken aboard. Two zodiac loads of kids came to the Arctic Tern and they were fascinated by the differences between a sailboat and the motor boats of Arctic Bay.