Bringing the Arctic to the desert

Share this page
Posted by Clive Tesar in From the field, General on 9 August, 2012
Tags: greenland, Last Ice Area 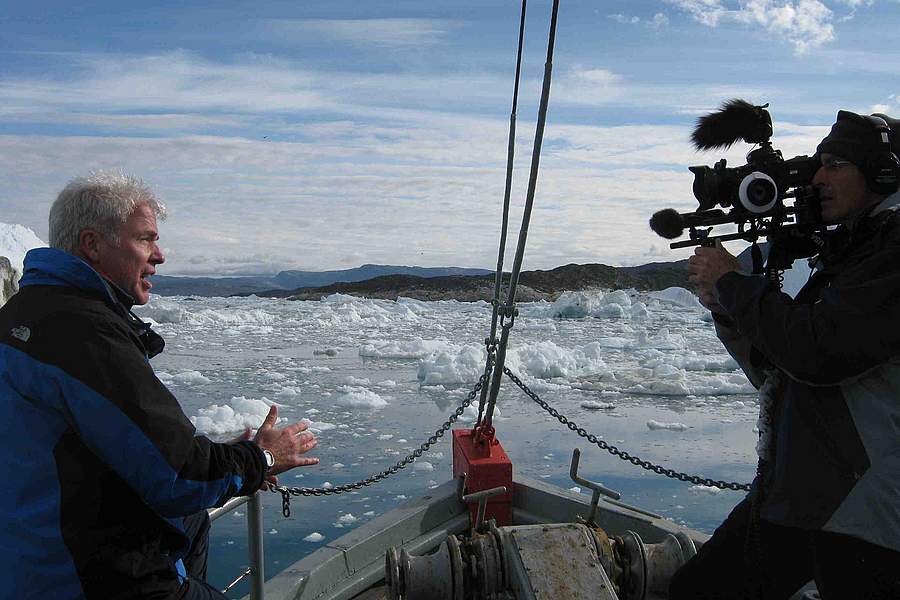 Nick Clark and Maurice Roper from Al Jazeera film on the voyage to the Last Ice Area in August 2012. © Clive Tesar / WWF-Canon

Through the helicopter’s open door, several kilometers of fractured ice stretch to the horizon – leaning into this landscape is Maurice, a cameraman for Al Jazeera. Up front beside the pilot is Nick, the reporter. Al Jazeera is a relatively new international television network based in the middle-eastern country of Qatar.

The television crew is coming along on the second leg of the Tern trip, but beforehand, they’ve flown with me from Iqaluit to Ilulissat. Juggling scarce northern flights has meant a two-day stopover in Ilulissat, but this is no hardship. The town on the west coast of Greenland is right next door to a world heritage site, the Ilulissat icefjord.

This glacier, about 9 kilometers wide, and 1.5 kilometers high at the face is the most productive in the northern hemisphere. Recent measurements have shown the glacier speeding toward the sea at a rate of 60 meters per day, a sprinter by glacier standards. When it hits the sea, it hurls down massive chunks of ice. Some are the size and shape of a supermarket, while others form fantastic shapes like cathedrals of ice with jagged glittering spires.

The Al Jazeera crew avidly films the frozen landscape. They will likely use some of this footage later this year. In November, the next round of international negotiations takes place in Doha, home base for the network. This coverage is part of what we had hoped for from this trip; to bring Arctic observations and voices to the attention of the global community.

As the Greenlandic ice cap speeds toward the sea,  the glacial pace of international climate action must also pick up, if we are to preserve the unique character of the Arctic.